In 2009 members of ArtsAction Group were introduced to a dynamic community center, Fellbach-Haus Creative Educational Centre, located in Suhareka/Theranda, Kosovo. From that initial introduction has emerged an ongoing partnership that continues today. 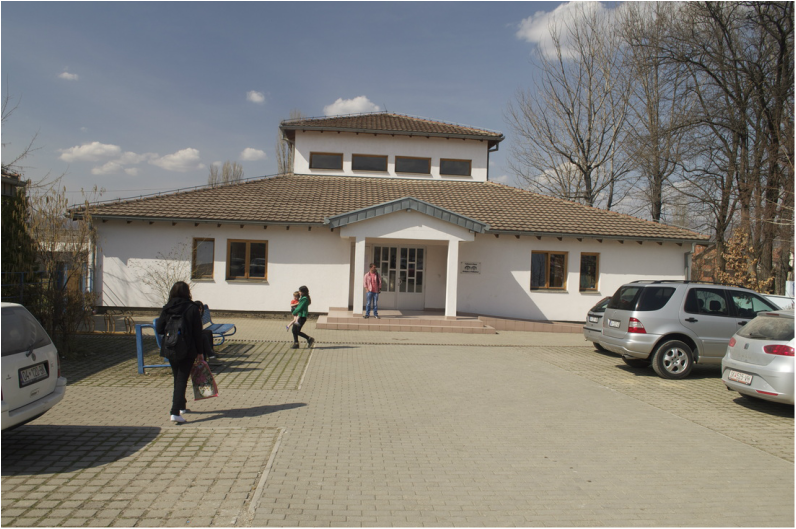 Centre for Creative Education Fellbach Haus
We continue to expand upon the art and design work from prior years with a focus on STEAM (science, technology, engineering, ART and math) and interactive art and design. Digital media is recognized as potential economic growth lever for the youth and young adults. We explore these possibilities via interactive art and design that includes project-based learning at the centre as well as through partnerships with children and youth in the USA. Check out our work in the annual overviews below. 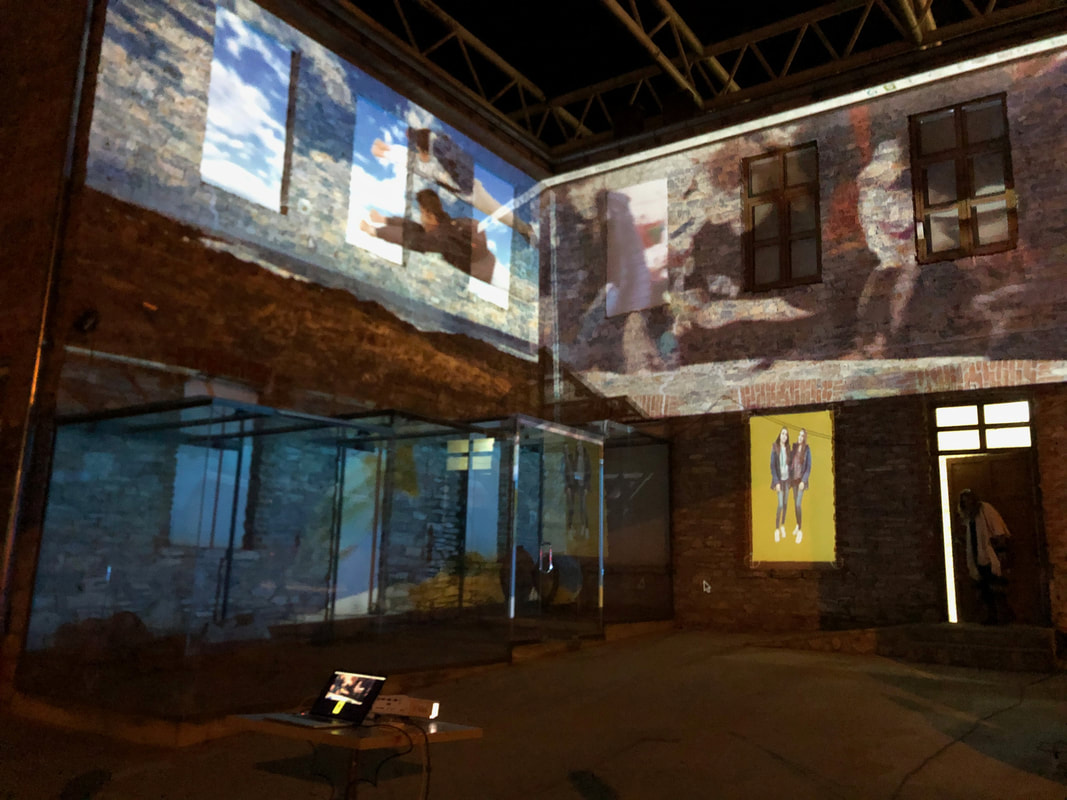 ​Working across digital media, including video mapping, film, sound, and greenscreen, the youth created a series of photos and short videos to explore their selves and gifts through the prism of past, present, and future. The work was projected onto three exterior walls of the Museum of Education as well as in the interior, which also included an exhibition of the children’s artwork. ​
*Thumbnails for slideshow won't always appear. Please click through to see images.
Video produced by Barrie Maguire

We designed two arts experiences for the children and youth this year. For the primary age children, the central question was: "What's your secret superpower?" By focusing on imagination, we validate the needs of every child to dream big and feel important. By creating and sharing their art about superpowers/super hero dreams, we invite children to consider what they value and even, thinking into the future, how they might behave in a position of power (Jaqueline Jules, n.d.). The central questions for the youth were "Where do you see utopia?", "Where do you see dystopia?", and "What is the space in between the two?" By wrestling with these engaging yet difficult questions around the world they see and the one they want to envision, the youth produced art that essentially helps them map these futures.
Video 1 by teaching artists Sasha Spare & Shannon Kopunek
The work was expressed through a series of making activities including painting, drawing, and interactive media bringing together sound, sensors, circuit building, 3D printing and projection to share the work with the broader community.

Year Six was all about art, aesthetics and technology. Prior to our visit to Fellbach-Haus we shared a short video of drawing machines created by students from the Sydney University of Technology.  Teaching artist Refki Gollopeni shared the video with his students who then began exploring how to create their own machines. We arrived a few months later and what you see is the outcome of our work working together.
Individual Drawing Machines
Sampling of the Drawings

2014 Outside My Window & Open Stories

ArtsAction Group collaborated with the Theranda Animation Arts Festival (Taff) initiated by Refki Gallopeni from Fellbach Haus. This work was an outgrowth of the excitement and interest generated from last year's animation workshops. We also welcomed the participation of Rebecca Davis, theatre artist and educator, into the workshops offered this year at Fellbach-Haus. The work of her students was performed during the final exhibition and screening of the international animation festival winners.

Singing performance on the final evening of the TAFF Animation Film Festival in Theranda. The singing is exquisite. 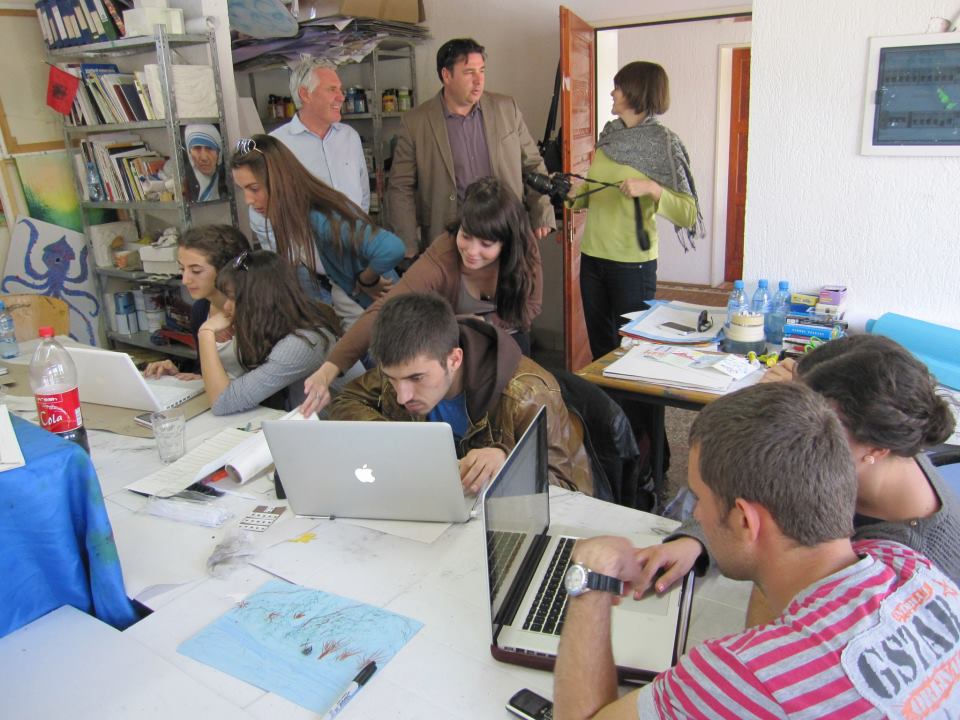 Editing in the studio.
ArtsAction Group members, Rob McCallum, Cindy Maguire, Dana Helwick, Emma Exley and Ana Fernandez in March 2012 introduced stop-motion and claymation animation to a group of elementary and secondary level students Fellbach-Haus. Discussions and explorations centered on the big ideas of story telling, identity and memory. Contemporary artists introduced into the lessons were Blu, for the collaborative, public space nature of his work and William Kentridge for his use of personal and socio-political narrative content. Other skills introduced included visual narrative story-telling as well as the youth curating the final exhibition.

We were privileged to have university students come from Pristina who had experience in animation to participate and make a valuable contribution in putting the project together.

For further details about the 2012 collaboration check out Helwick's article in an NYU publication and Maguire's article in Her Circle magazine. 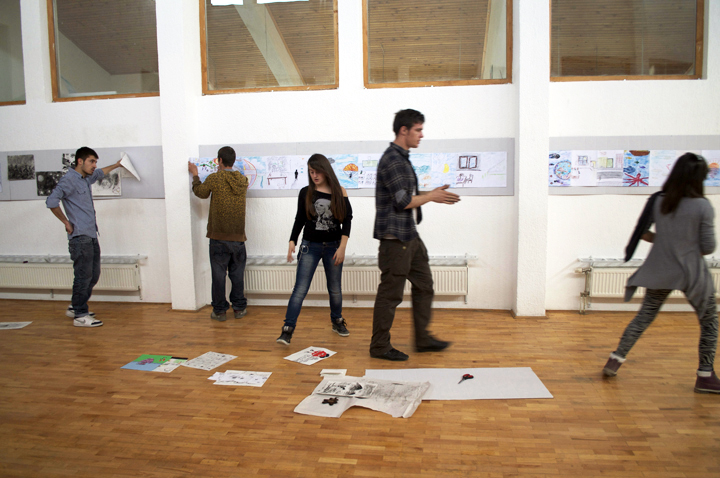 Youth curating the final exhibition.
Cindy Maguire and Rob McCallum returned to Fellbach-Haus and worked with Refk Gallopeni  for the second year of our collaboration, Mapping Suhareka! During the Balkan War and specifically within Kosovo, it is estimated that over 90% of the buildings across the country, were damaged and/or destroyed. In light of the rebuilding efforts going on across the region, ArtsAction Group and Fellbach-Haus chose architecture and community-design as a focus for the work.Discussions and explorations looked at mapping as metaphor and included the artwork of Mark Bradford and David Hockney. Bradford transforms materials gathered from the street onto wall sized collages and installations that respond to the impromptu networks - underground economies, migrant communities, or popular appropriation of abandoned public space - that emerge within a city or community.  We started with youth researching, visually mapping and interpreting the spaces and places in the community that hold meaning for them. After mapping, the youth were charged with conceptualizing public places and spaces for present and future community needs/desires.

This initial work was collaborative while the following project, designing a community space and/or building included options for solo or team work. The final exhibition, curated by the students, showcases the project for the community and invited guests.

A week-long arts workshop with Terry Lenihan ( a Professor at Loyola Marymount in Los Angeles, CA.) and Cindy Maguire, with Refki Gollopeni, at Fellbach-Haus. They worked with elementary children and high school youth. The project involved self-portraits, mural painting and finally bridge building as a way for all the communities to introduce themselves and get to know one another. The final artwork was exhibited as an installation with all three murals exhibited in Los Angeles, New York City and Theranda. Our K-8 partners were the Allen-Stevenson School in New York City and a K-8 school in Venice, CA.