All of our projects are co-created with the communities we work with and include children, youth and young adults in the United States and internationally. Our goal is to link the individuals and organizations we work with to one another - across real and imagined borders - in order to foster global awareness as well as dispositions and abilities in communication, creativity, collaboration and critical thinking, the 4 C's associated with the Partnership for 21st Century Skills (P21). 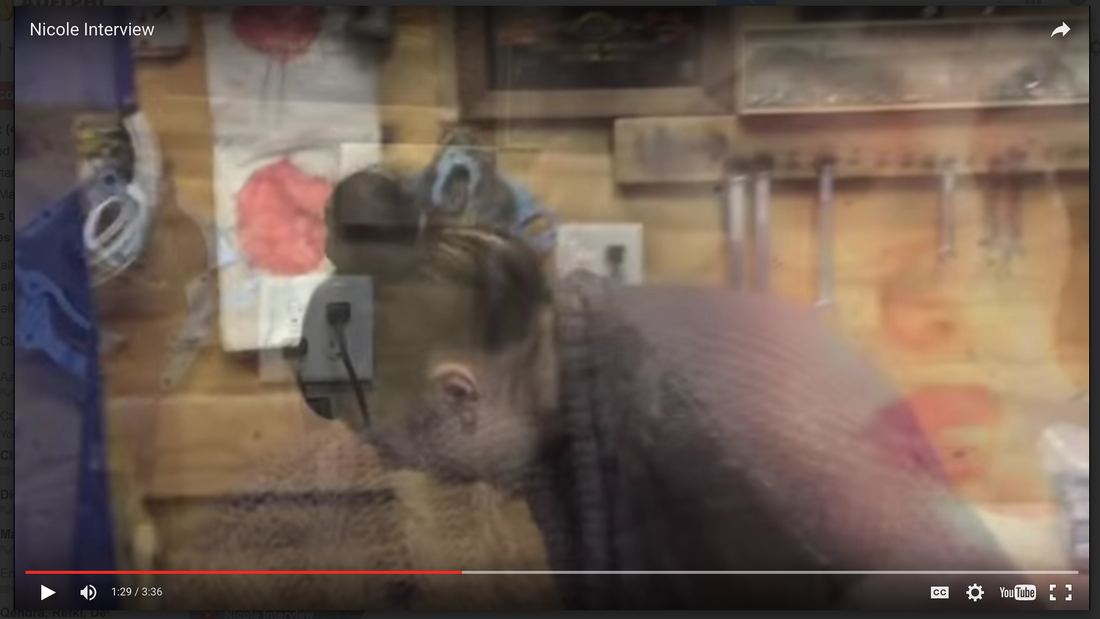 Nicole by Rachel Herbert
Telling Stories: USA & Kosovo. Youth and young adults from across these settings created video shorts based on interviews of an individual from their family and/or community who've touched their lives. These stories were shared within the communities as well as between students from the USA and Kosovo. across the communities. The project is inspired by StoryCorps. 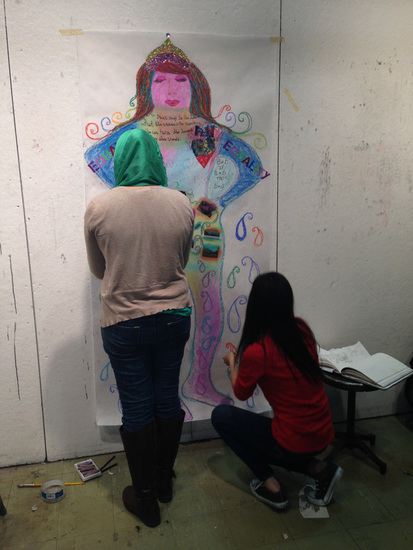 Adelphi University students at work.
Photos of the students at work across the three classes.
The Adelphi Body Maps were created by students enrolled in the following courses:
·       First Year Freshman Seminar
·       Arts, Social Media and Human Rights
·       Exploring the Visual Arts

Students first responded to the prompt: “Outside my window I see….” Interpretation of the prompt, whether it be literal and/or figurative, was left up to the students. They then organized themselves into teams of three and were tasked with creating a life-size hybrid-figure, representative of their collective identities. The work was to be shared with children and youth at Fell-Bach Haus in Kosovo and the Western Sahrawi primary school in Camp Boujdour, Algeria.

The written/visual prompts were used as a starting point for teams to discuss how to bring their ideas into one cohesive work as well as to provide them with initial ideas for visual imagery. A brief overview of symbolism and how to work with various elements of art and design was also provided.

The Body Maps in each class were conceptualized and completed over the course of 3-4 class meetings and subsequently exhibited at Fell-Bach Haus, Suhareka, Kosovo and Camp Boujdour, Algeria.
​

In the Freshman Seminar course, Arts as a Tool for Social Change, students from a variety of disciplines learn about, discuss and debate how the visual and performing arts have been used to advocate for human rights in 4 case studies: 1) South Africa and the anti-apartheid movement; 2) Kosovo during and after the Balkan Wars; 3) Western Sahara and the fight for self-determination; and 4) the United States and the Prison Industrial Complex. We explore concepts such as bystanders, victims, perpetrators, and upstanders, concepts adopted from Facing History, Facing Ourselves as well as ‘freedom,’ ‘equality’ and ‘justice’, which inform the Universal Declaration of Human Rights (1948).

The Arts, Social Media and Human Rights course addressed the rise of social media over the past decade and its role in social movements and revolutions around the globe with a focus on Kosovo, Western Sahara and the Arab Spring (Egypt, Tunisia, Libya).  The importance of narratives, art, documentary and photographs in the formation of public perception, on political and economic policies, and their symbolic (and artistic) impact on human rights were explored.

Exploring the Visual Arts asked pre-service education students from multiple disciplines to translate education theory from a global perspective into practice by exploring creative questions, problems, and ideas through a variety of art materials as part of thematic lesson planning. Artistic expression, global awareness and citizenship were explored via the Body Maps project, which included an overview of the historical and current contexts of Kosovo and the Western Sahara.
﻿Critical questions students consider:

We return to the Brentwood Residential Center with our favorite partner Artistic Noise. The arts workshops, designed by Artistic Noise and based on a restorative justice model continue, as we work with girls ages 13 - 17 years. Current projects include Ubuntu Memory Bowls and poetry as well as Collages based on individual and community identity.

The Body Maps project was brought to the Brentwood Residential Center in collaboration with one of our favorite youth-based organizations, Artistic Noise. Artistic Noise provided the overall framing of the arts workshops based in restorative justice and teaching artist Lauren Levin introduced the girls to yoga and mindfulness. Specifics for this project. In lieu of the prompt "Outside my window I see..." we asked the girls to create individual "I Am" poems as the basis for designing individual large-scale body maps. This project was lead by Lauren Levin, MA Art Education and Alyssa Kurtzberg, BFA Art Education.
Individual body maps with "I Am" poems text incorporated into the background.
The artists are: Alexia, Theresa, Shamayia, Selena, Doris, and Armoni. Two of these body maps were part of the ArtsAction Group exhibition at the Woodstock Artist Association and Museum (WAAM).

The week-long arts workshop with Terry Lenihan ( a Professor at Loyola Marymount in Los Angeles, CA.) and Cindy Maguire, with Refki Gollopeni, at Fellbach-Haus in 2010 began with artwork created by students at the Allen Stevenson School in New York City, NY and the Westside Magnet School in Los Angeles, CA.  A culminating collaborative bridge building installation was produced at the Westside Magnet School and the artwork created by all three sites was as exhibited Los Angeles, New York City, and Suhareka.

The project involved self-portraits, mural painting and finally bridge building as a way for all the communities to introduce themselves and get to know one another as well as to engage in contemporary art & design education experiences. The final artwork was exhibited as an installation with all three murals exhibited in Los Angeles, New York City and Theranda. Our K-8 partners were the Allen-Stevenson School in New York City and a K-8 school in Venice, CA.
A class of 3rd grade students were introduced to the community and the region with a focus on how the community uses arts and culture as a healing tool post-conflict. The first project involved each student creating a hybrid-self portrait where a favorite animal was incorporated into their artwork. The second project was a collaborative, large-scale mural of New York City. Both projects were created as a means of sharing individual and collective narratives with their counterparts in Suhareka and Los Angeles.
Allen Stevenson School boys at work
The Westside Magnet School project was facilitated by Terry Lenihan, Associate Professor and Director of ARTSart at Loyola Marymount University in Los Angeles, CA.
Loyola Marymount and the Westside Magnet School kids at work