Suhareka/Theranda is located at the northeastern end of the Plain of Prizren , which is located in southwestern Kosovo. Behind it rises the hilly area Carraleva, from which the river Topluga rises and flows from the east through the city. The municipality has approximately 80,000 residents, over 90% of Albanian ethnicity. Arts and culture are highly valued by this community and seen as a means of catalyzing economic vitality in this region. Suhareka is home to multiple arts and cultural events, such as Festari, started in 2002, and Prizren, 17 kilometers south, hosts the annual DokuFest festival.

​The town found itself in the center of the 1998-1999 Kosovo war sustaining major damage including wide-spread instances of ethnic cleansing, rape, and disappearances. Over 80% of the homes were destroyed and virtually everyone in the community has relatives and close friends who were killed under both known and unknown circumstances. 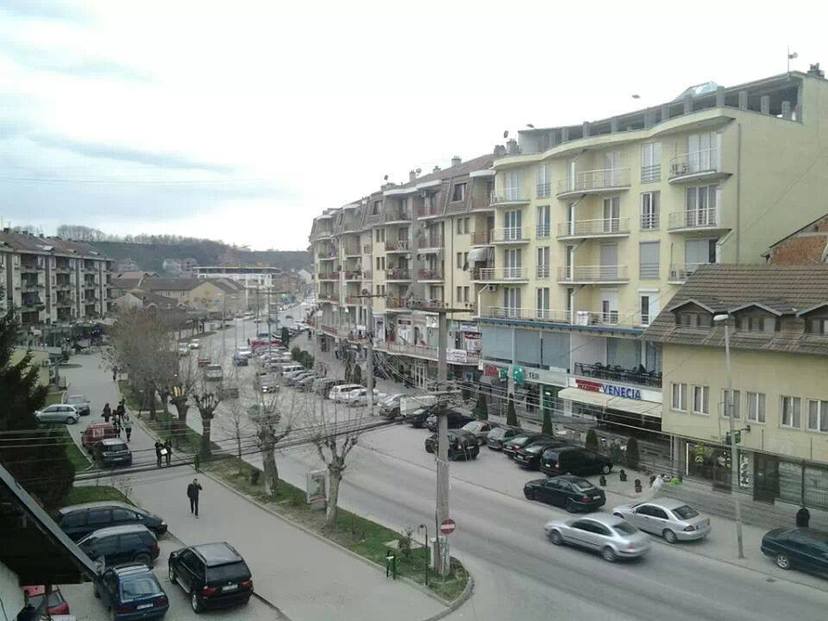 Downtown Suhareka/Theranda in March
Even though Kosovo declared its independence from Serbia in 2008, its status as an independent nation is still unrecognized by several other key countries making it difficult for Kosovars to participate in a variety of economic and cultural-building activities. Kosovo citizens remain the economically poorest in Europe with an average annual per capita income of $6,500 and an unemployment rate of at least 65%. With over half of the population estimated to be under the age of 25 years combined with high unemployment, there is an immediate need to build upon the innovative, creative, and entrepreneurial knowledge and skill potential that exists within the community. 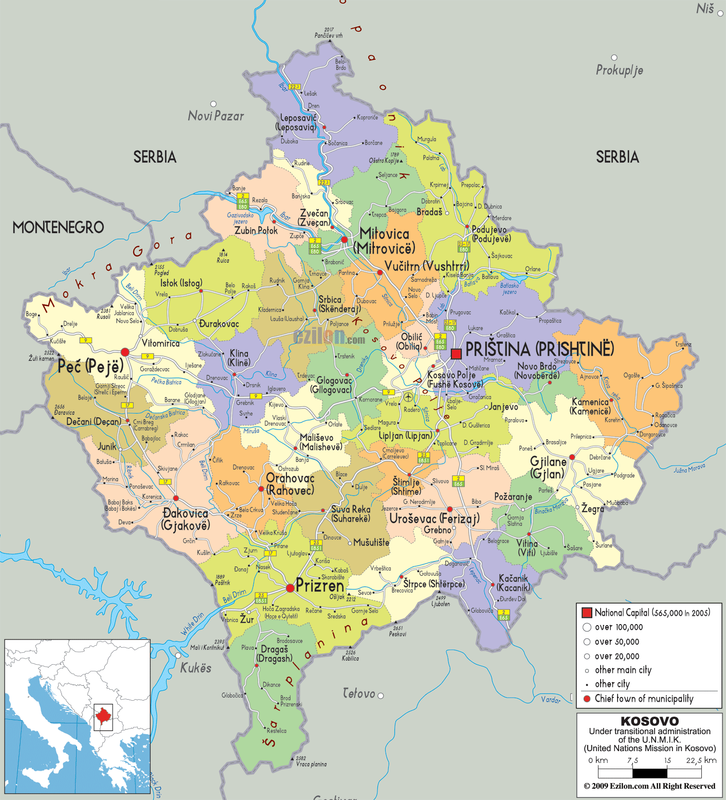 ​ArtsAction Group partners with Tamil communities in Ilavalai and Alampil, in the Northern Province of Sri Lanka. Ilavalai is a small coastal village located north of Jaffna. Alampil, Mullaitivu is situated on the north-eastern coast. The beaches bordering the the Bay of Bengal are a short walk or bike ride from the village centers.

The region reflects a deep history through its Hindu temples, churches established in the 1800s, and Buddhist temples. It's also the home of the University of Jaffna, established in the 1970s. The more recent history of the 28-year civil war is still evident. The total death toll of civilians during the 28-year conflict has never been accurately accessed. In 2012, three years after the end of the war, U.N. records indicated that Sri Lanka was second only to Iraq in the number of unresolved missing persons in the country; the work of recovery continues with the Covid-19 pandemic only adding to these stresses. To date we are partnering with two schools in the Catholic school system, with other schools expressing an interest in joining the partnership. Since the end of the war in May 2009, rebuilding the lives of those affected by the wars is a priority of the faculty, counselors and families in the communities where we work. ArtsAction Group is honored to join them in these efforts. 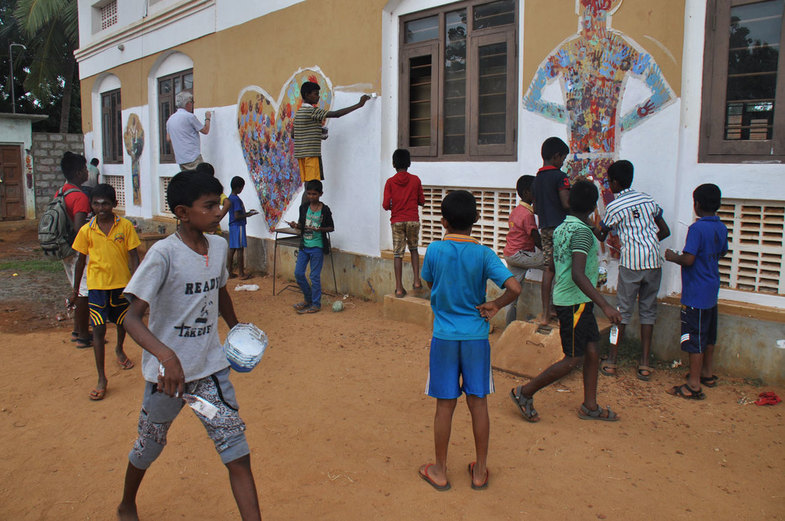 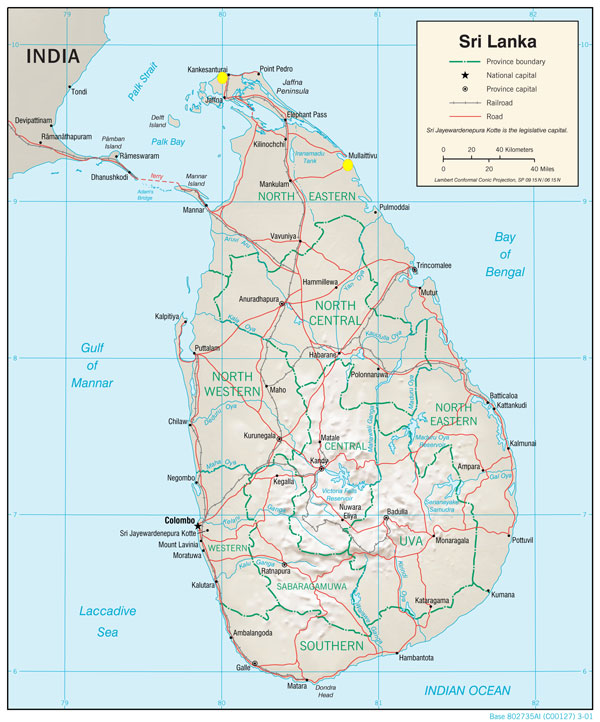 Map of Sri Lanka
Western Sahara and the Refugee Camps

The territory now known as the Western Sahara was a Spanish colony from 1884 until 1976. The Sahrawi refugee camps in South-Western Algeria were established over 35 years ago after a protracted armed conflict with the Kingdom of Morocco which laid claim to large portions of the country after Spain pulled out of the region. It is often refereed to as the last African colony and has remained on the UN Decolonisation Committee’s agenda since October 1964 to the present. The ongoing existence of the camps is a stark illustration of the political impasse that exists when discussing the future of the Western Sahara community, both in occupied Western Sahara as well as the liberated territories and the camps. 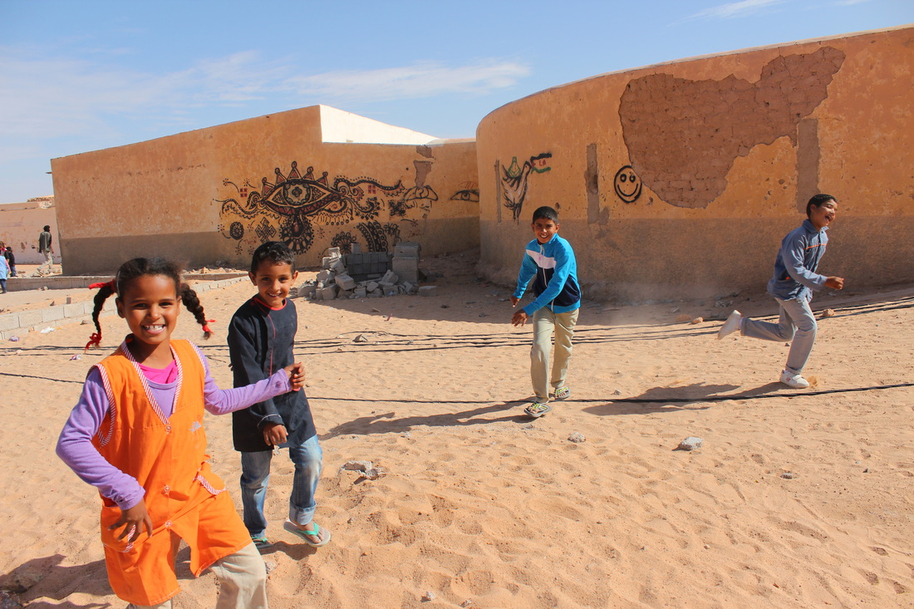 Playing in Camp Boujdour
Approximately 155,000 refugees are currently distributed amongst four major camps named after the main cities in the Western Sahara (Aaiun, Ausserd, Smara and Dakhla), and a fifth, smaller camp which has developed around the National Women’s School (called Camp Boujdour (formerly the 27 February Camp). Camp Boujdour is the home of three institutions of higher education: the Abidin Kaid Saleh Audiovisual School, the Saharawi National Music School, and the Saharawi Art School. 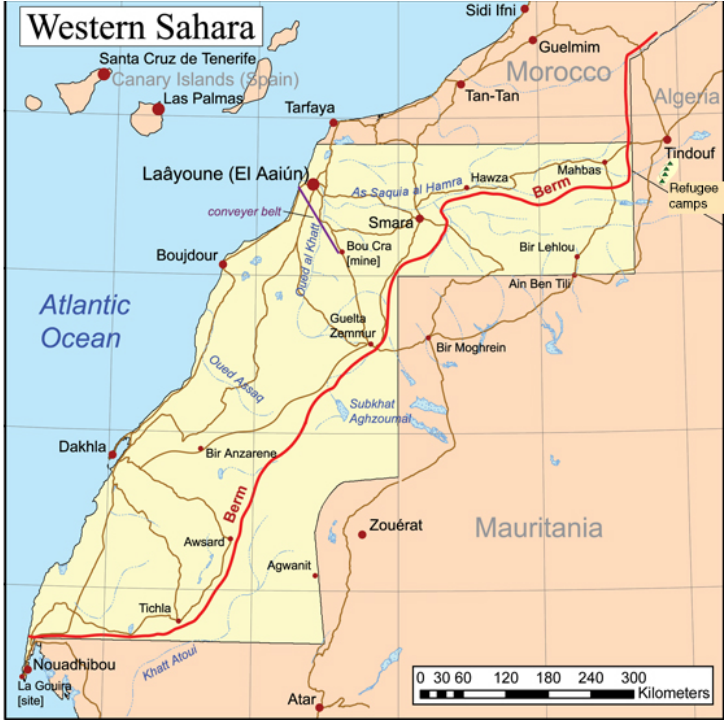 Map of the Western Sahara (wikipedia), the Wall, and camps outside of Tindouf.
Most resources to the camps are provided by UN agencies and international Non-governmental organizations (NGOs). Since 1991 there is an increasing small market/cash economy supplied by the diaspora and small businesses including payments to community members by NGOs. Malnutrition (high levels of chronic infant and maternal malnutrition amongst residents), and decreasing school enrolment rates including the withdrawal of eldest daughters from school continue affect this community. Over 50% of the refugee camp population is estimated to be under the age of 18. Youth who leave the camp for educational opportunities increasingly do not return, leading to “brain drain”. Hence, there is a recognized need for youth retention activities in the camps as well as a call for more participatory research that includes the voices and experiences of the camp’s children and youth.

For more information about the Western Saharan context, check out Sandblast: Voices and Visions from Western Sahara, a British-based arts and human rights charity focused on music and Motif Art Studio and Workshop.
Long Island, New York, USA
In the United States we work across a variety of settings with most projects to date located on Long Island, NY. Long Island has a rich history and is among the most demographically diverse regions of the USA, a trend that began in the early 19th century. This diversity is evident across income, housing, education, ethnicity, country of origin, and age. This diverse population, however, is highly segregated due to the geographic boundaries of the high number of local districts in comparison with the rest of New York State and the USA. Some outcomes of this geographic segregation are the large percentage of students of color clustered in 'high needs' schools and the lower percentage of of per pupil funding found at these sites. There is a recognized need for facilitating arts and cross-cultural encounters with the children and youth, both within and across these communities.
​
Our work is currently centered centered at a university with a high percentage of first- and second-generation college goers, a public high school, and at a residential center for girls involved in the juvenile justice system (a project in partnership with Artistic Noise).